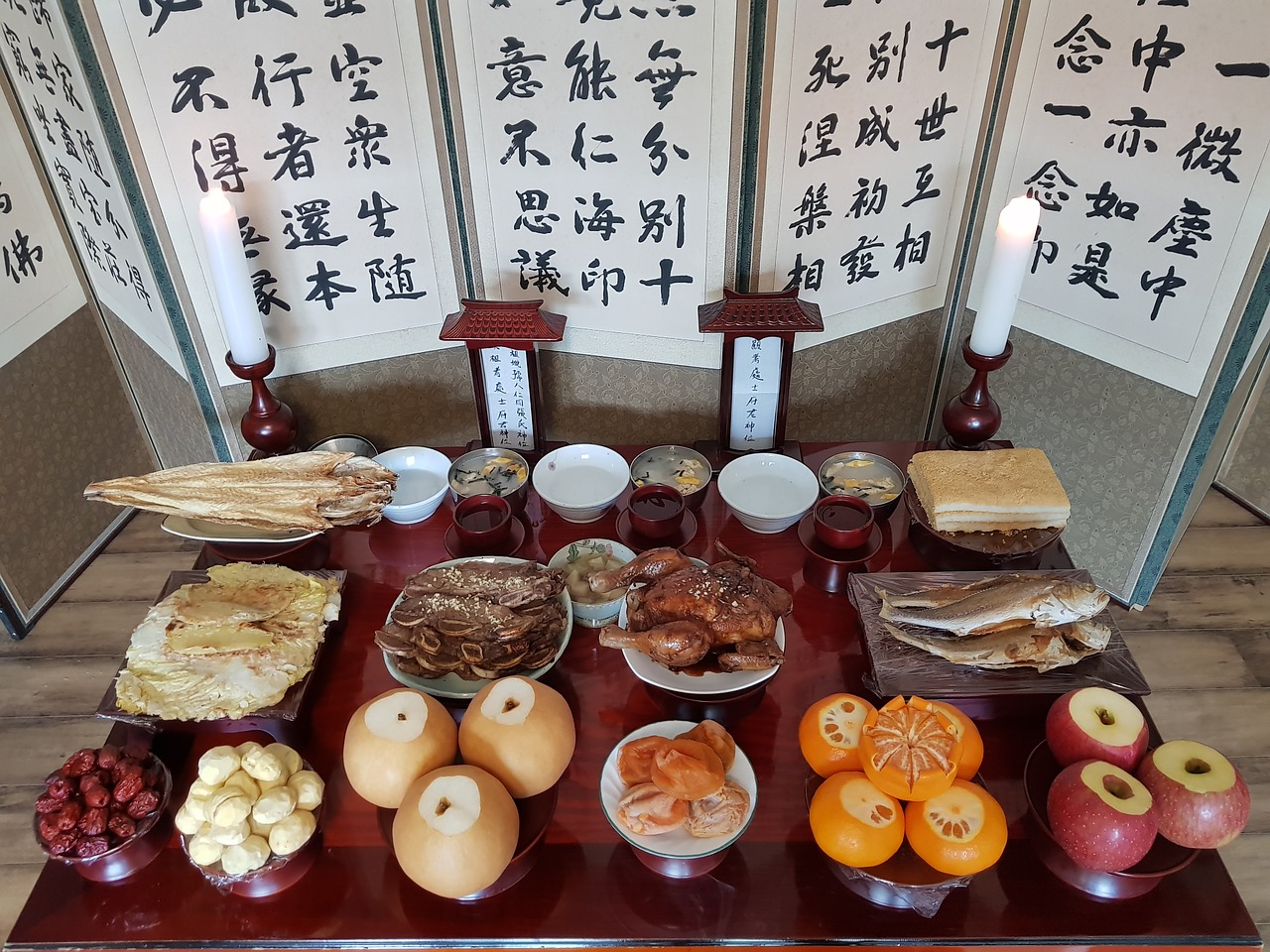 I’ve mentioned this before, but when I was a kid we had a kind of unofficial ancestor shrine. Nobody called it that of course, but that’s essentially what it was. To most visitors it was nothing more than the corner of the living room.

It just happened to be filled with lots of photographs. However with our familial ties to Spiritualism, it had an extra layer of meaning for us (even if only subconsciously).

It was never worked like an ancestor shrine, but that doesn’t matter because it still did what it needed to. It provided a focus and gave them a place in our home.

Open Shrine or Closed? Some Considerations

My family’s unofficial shrine was open, any visitor could see it. However, you might want to take some time to think about how open you want your shrine to be. You see for some people, an open shrine is to be avoided. Visitors may not understand or respect it. They may even actively try to mess with it if they have a grudge. Some people feel that the ancestors prefer somewhere peaceful in the home, and some traditions simply prefer to maintain a degree of separation between the living and dead. Keeping your shrine away from more “public” areas of the home can be a way to protect and keep sacred what might be seen as the power of your family.

However for other shrine keepers, the shrine is best kept where it can serve as a daily focus for family rites. That doesn’t necessarily mean that the people who keep an open shrine don’t share the same concerns about visitors! However for these people, the focus is typically more on continued inclusion of the deceased in family life.

If you’re not sure whether to build an open or closed shrine though, it can be helpful to take some time to consider your perception of shrines and how they relate to the ancestors themselves. Do you believe they’re always present at the shrine or do they (hopefully) come for rituals/when called upon? Because if you think they’re always there at the shrine then you may want to opt for a closed shrine.

You can also take a mixed approach too, keeping an open shrine but with closed spirit houses/vessels. This is the approach I take. Others keep their shrines in public areas but cover them in some way.

Ancestors are about story. We exist because of their stories, we build their stories into our lives, and we keep their memory alive in story. The ancestor shrine is no different in my opinion (though not all traditions agree). I look over at my family’s ancestor shrine and on one level I see a random collection of old photos and objects. However, I know that each of those objects aren’t just randomly selected, there are stories attached. So I guess what I’m saying here is that ancestor shrines can become quite busy. It becomes all too easy to add the old rosary of a beloved aunt or one of grandma’s crochet hooks. So be mindful of space. Unless you’re incredibly disciplined and/or already belong to a tradition that takes a more minimalist approach, you’re going to need enough space to really sink into this practice.

Ideally in my opinion, an ancestor shrine should be in either the west or north. 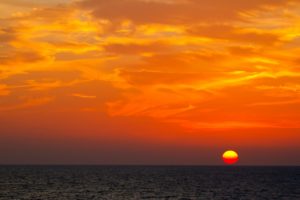 My reasoning for this is twofold. First of all, both of these directions have traditionally been linked with the dead in various folklores and mythologies. For example, the Old Norse Hel is said to be in the North (Simek 1993, 137), and multiple European mythologies depict the dead going over the seas to the land of the dead (which for many were in a westerly direction) (Heide “Holy Islands”). Secondly, I’ve always had greater effect when working with this directionality while working with the dead. Your mileage of course may vary.

So you have your space picked out, now it’s time to fill it. Before doing so though, I would take some time to cleanse and consecrate your space in whichever way is typical for your tradition or way or working. Because regardless of tradition, one of the keys to working with ancestors is cleanliness. So make sure that anything you use for the ancestors is clean first, in all senses of the word.

Once you have your space and it’s ready, it’s time to remember those stories I

mentioned before. In the beginning, you probably won’t have any spirit houses or vessels – they tend to come with time and after working with the dead. But that’s okay. Because you can make a good start with photos of deceased (no living!), candles, offering vessels, an incense holder, and some stones or soil from ancestral sites.

If you have anything of your deceased – those storied items – add those too. One rule that you need to keep in mind though, is that once something goes to their shrine, it stays with their shrine. So you really need to make sure that the offering vessels don’t get mixed in with your living family crockery. This can be

a little confusing if you use everyday-looking items as opposed to more obvious ritual bowls.

My ancestor shrine also contains a couple of Matronae representations, and if your tradition has a group of collective dead like that, then you may want to create or add a representation of them to your shrine. It’s worth noting here that I also have other representations of the Matronae, but this second set are for the worship of a more locally-based collective of Matronae.

Once you have your shrine set up, you’ll most commonly interact with it in three main ways:

As I said above, cleanliness is key to working with the dead. You know that advice that you see in literally every ghost show ever to clean up your demon-infested hole if you want to get rid of them? Well, there are reasons for that. Ancestor shrines can attract some opportunistic entities that will mess with you – especially before they’re established. Once your shrine is fully established though, the shrine and the ancestors represented can serve as powerful protection against all kinds of nasty things.

For example, when I was pregnant (and therefore under magical taboo), some individuals decided to try starting a witch war with me. Sensing it coming, I went to my ancestors and basically gave them the heads up. One night a few days afterwards as I was lying in bed, I noticed the outline of a humanoid figure in my kitchen (which I could see from my bed). I knew it was someone creeping and so started trying to think of ways that I could get rid of them without breaking my taboo. However I need not have worried, because the humanoid was very quickly surrounded by a red mist and the buzz of voices that amplified before disappearing with a snap. They’d been escorted out of my home by the ancestors!

That’s the kind of thing I’m talking about here.

So you want to keep your shrine clean. None of this “doing so much work that the dust doesn’t have time to settle” mentality here. That doesn’t work here in my opinion. Keep it clean, keep it light, and keep it bright.

The second main activity is simply checking in with your ancestors. This can

be as simple as lighting some candles and then sort of keeping them in the loop like you would living relatives that live far away, or making them and yourself some coffee and sitting down for a full on chat/advice session. You may not get a whole lot at first in terms of communication, but remember, dead communication can be pretty damn subtle. So be patient. If you’re really struggling, pull out some divination tools.

Feeding your ancestors in an important part of ancestor cultus, however it’s worth bearing in mind that different traditions consider different things suitable/unsuitable for offering. For example, in some traditions, you don’t offer alcohol to the dead because it’s “hot” and will lead to restless dead. You want to only offer “cool” things like water. However in other traditions, alcohol for the dead is perfectly fine. There are also different protocols for how long food and drink offerings should be left out. Generally speaking though, it’s a good idea to only leave things out for a couple of days. Remember that cleanliness thing? You want to avoid things going nasty and moldy on there.
And again, don’t consume what has been given to them.

However, food and drink aren’t the only offerings that can be given to the dead. Flowers, candles, incense, songs, crafts and prayers can all play their parts too! Depending on what you’re offering, you may need to either burn or submerge your offerings in water. By fire or by water are the traditional pathways through which offerings may be gifted to the dead. After all, if the dead can reach the afterlife via water or fire, then your gifts to them can most certainly take the same routes.

When you’re not used to working with the ancestors, it can be all too easy to feel self-conscious. It can be easy to feel like you’re not doing it right. Don’t worry though, they’re pretty used to us fucking things up. In my experience, they’re just glad you’re trying. So keep trying. Work with your shrine. Figure out what gets the best responses. Go with your instincts regarding placement of objects, ways to approach or leave, and what kinds of offerings are appreciated.

Even if all you can summon is a big fat “I haven’t a fucking clue what to say”. Just sit there anyway. Say what comes to mind. Confess your fears and worries. This stage is all about trying to create and nurture that connection. Give it a month of checking in and making offerings every couple of days at least.

In the next post, I’m going to look at the nuts and bolts of ritual with the ancestors. Prayers, songs, all that jazz. So stay tuned.