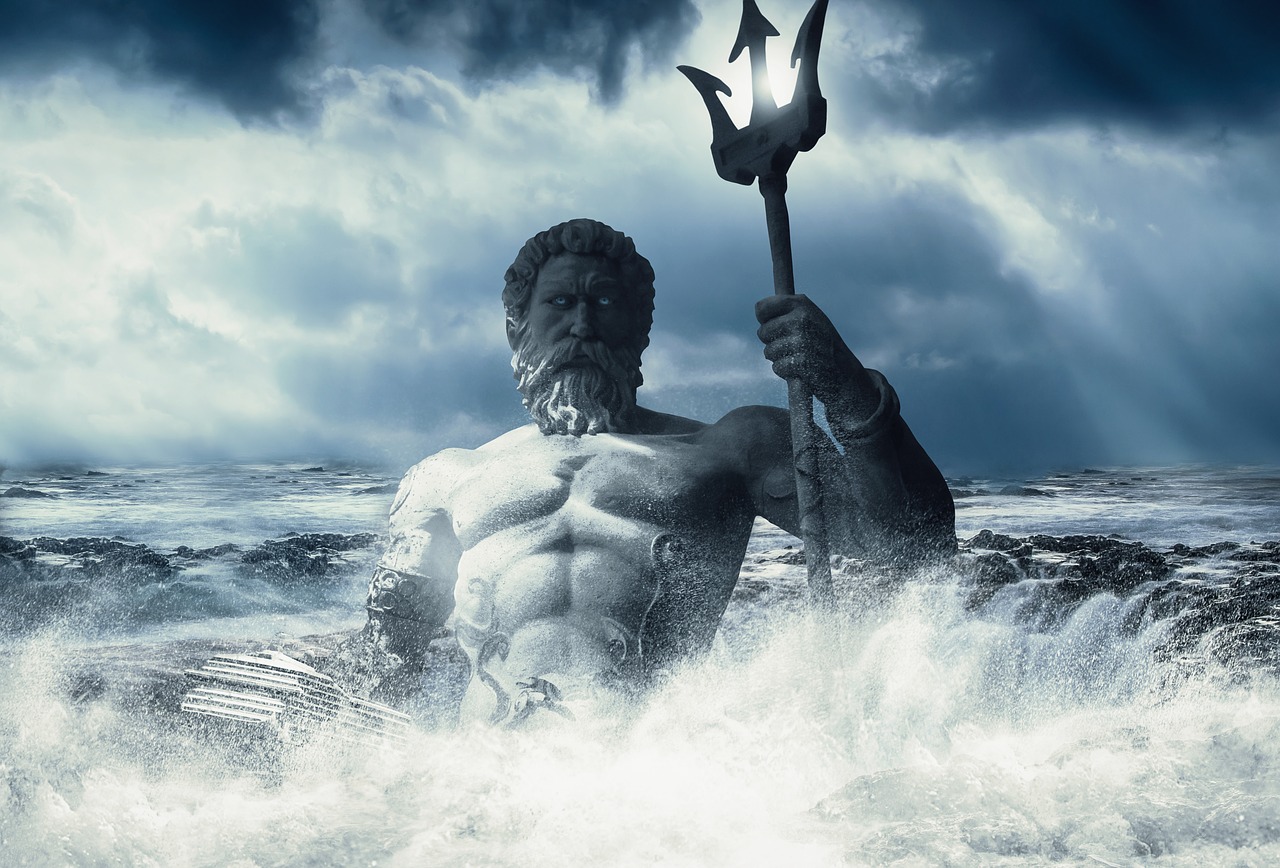 I would like for you to take a few moments and think about the last time you experienced awe.

When was it? And what was the source of that awe?

As a word, awe is used somewhat loosely nowadays. It has become more

commonplace and casual than it used to be. How often do you hear people referring to something quite ordinary as being awesome? Or the performance of an athlete as being awe-inspiring? Perhaps you’ve even told a friend that you’re in awe of them?

But despite these modern uses, awe is actually a powerful (and useful) word. More importantly though, I would argue that an understanding of, and experience of awe is integral to witchcraft.

According to the Merriam Webster dictionary, awe may be defined as an emotion that variously combines “dread, veneration, and wonder”, and “that is inspired by authority or by the sacred and sublime.”

Witches have always held a reputation for transgression and subversion. So clearly it’s not the kind of awe that is inspired by authority that is of interest here. As always, we are concerned with the sacred (at least to our eyes) and sublime.

Awe and the Numinous

In the modern Pagan/Witch/Heathen communities, there is a tendency to consider the numinous in a more positive light than is traditional. As I have written before, we are inheritors of cultural ideas that have been systematically diminished over the ages. For example, dream is no longer commonly considered a place in which one may encounter the dead and Otherworldly. And fairies have been transformed from their original, often terrifying understanding, to cutesy and twee ‘nature spirit’ type beings.
Don’t believe me? Then take some time to imagine fairies as being awe-

inspiring and capable of producing that curious combination of “dread, veneration, and wonder”. (If your mind found that incongruous in any way, then you have some unpacking to do.)

In its most archaic meanings, awe is “dread” and “terror”, but also having the power to inspire that dread. And this is where we come to the numinous. Because beings that are capable of inspiring awe in the first place, cannot be harmless and always “good” (at least by human standards). There can be no awe without the ability to cause dread and terror, and no ability to cause that dread and terror without the agency and capacity to either seriously harm you or take your life.

If you have never encountered a being that you have known, on some bone-deep level, could hurt and/or even kill you, then you have arguably never experienced awe or the numinous.

And this isn’t even about encountering hostile beings or having bad experiences. You can have the best and most wonderful experiences and still experience that awe. Because awe is not about what happens on the day, but rather an ever-present potential outcome should you misstep.

In 2016, I wrote a post entitled Witchcraft is not Safe (and nor Should it Be!), in which I detailed a nocturnal experience from over a decade ago in an ancient burial mound. To cut a long story short, we encountered a hostile numinous being, got out okay, and it was a learning experience for all.

As one might expect, it provoked a variety of reactions. One of the most confusing of those reactions though, was the notion that witches should only interact with those beings that are “on their level”. Or in other words, “don’t punch above your weight”.

Which is a rather curious response. Because every time we invite deities and/or members of the Other to our rituals, or try to cut deals, we are attempting to “punch above our weight”.

(Yes, deities, and the Other are “above our weight”. We wouldn’t need to bother them if they weren’t.)

Yet few seem to realize this, and if anything, deities (especially) are almost seen as being “safe” to work with. There are of course layers of nuance here. And as many will point out, there is an association between many deities and some form of social/cosmological order. This (or so many seem to believe), makes them less unpredictable (and ergo less potentially harmful) than other types of numinous being.

Witches and the Numinous

However, as witches, those of us working within a Northwest European framework have to recognize that much (if not all) of our magic originally comes from the Other. This is a consistent theme that you find from the Viking Age to the Early Modern Period. In fact, it was the initial encounter with the more mercurial and Otherworldly numinous powers that made the witch. And these encounters were often quite terrifying! For example, one 17th century cunning woman, Janet Trall, claimed to have almost lost her mind with fear on encountering the fairies (Wilby 82)!

Moreover, this is something we see even with a spirit as intimate to the witch

as their familiar/s. There is a power imbalance inherent in this relationship too, and one that does not favor the witch. Familiars too are “punching above” the witch’s “weight”! And when you further contextualize that relationship within the wider system of Otherworldly hierarchies, then the witch really ain’t all that and a sack of spuds when it comes to position and power!

That’s not to say that we human witches are like driftwood being tossed by a far greater sea though. If we’re clever, we can make allies, employ risk management strategies, and use our cunning to bring down much bigger foes. If we’re not…well…

All of this is simply part and parcel of being a witch.

Before concluding this post, I’m going to make one final point regarding hierarchy and awe. And that is, that in my experience, there is a difference in the degree of awe experienced when encountering a ‘big’ numen vs a ‘smaller’ numen.

Let me explain, the first time I encountered Frau Holle/Holda, I had crept over frozen ice to lay an offering at the foot of a statue. (This is clearly a ‘don’t try this at home, kids’ moment.)

When I first stepped out onto the ice, I thought I was just going to look at a cool statue of a folkloric figure. I wanted to get a photo from up close. But as soon as I got there, I was hit with such a sense of awe that I instinctively fell to my knees. Looking up to the eyes of the (modern!) statue, I knew I wasn’t just seeing the statue of a folkloric figure. Flashes of deep, ancient roots going back through time ran through my mind. And though it was my first time “meeting” her, I felt love, wonder, terror, and yes, dread.

Oaths started to tumble from my lips – to dig into those roots and put information out into the world about her true origins. There was a strong sense that I should give her some incentive to not take me on my way back over the ice. I gifted her a small berkano pendant I’d been sent by a silversmith friend out of the blue, buried it at the foot of her statue in the snow to run off into the pond with the spring melt.

Then on my way back over the ice, I heard this indescribable sound. It sounded as though it was rushing up from depths and whirring all at the same time. I rushed back to the banks of the pond and into my husband’s arms.

Tense moments passed as we stood and waited for an omen. Then suddenly the atmosphere changed. The fog cleared and bright sunshine broke through the trees to bathe the statue and us in golden light. When we went to walk back to our car, we found we’d been parked less than five minutes walk from the pond though it had taken us around two hours of wandering over a frozen mountain to get there.

Awe and the Degree of Potential Harm 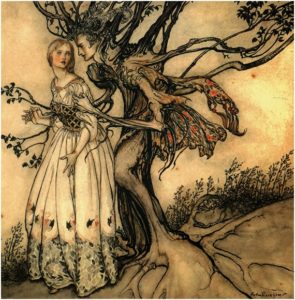 Other beings have produced awe to a lesser degree in me. Instead of outright terror, there’s an edge of caution. Over the years, I’ve noticed that these tend to be the beings who seem less capable of harming me, or at least can only harm me to a lesser degree. And so I’ve learned to listen to those feelings. When not obscured by bullshit ideas garnered from Victorian nonsense and scientific materialism, those feelings can be a useful guide to who you are dealing with and how careful you should be.

So I ask you again. When was the last time you felt awe?