I’d recommend Rune Soup premium memberships to anyone, because they really are worth the $10 per month. They’re all are well-presented, the content is killer, and the grimoire course was no exception.

One phrase from that course has been going round my head on repeat this week:

You’re probably wondering what I mean by that. After all, it is a pretty weird (yet self-evident) statement when presented without context. (Because what else are lobsters going to do but lobster as hard as their little crustacean selves can lobster?)

I would hazard a guess that no one has any issues with that concept, and would think anyone strange who expected dog or human behavior from lobsters. Yet when it comes to the world of the Unseen, we seem to lose the ability to understand that, and our expectations become entirely contemporary and human.

In the first part of this mini-series of posts on authority and hierarchies, I’m going to take a look at the way modern human ideas about numinous beings run counter to more traditional ideas. I’ll move more explicitly into discussing the implications for practice in the following posts.

Perceptions of Spirits, Fairies, and Other Non-Human Persons

We humans engage in anthropomorphism often. We do it with our pets, with senators, and even with numinous beings. However, this is a deeply problematic approach, because when you try to ascribe a certain set of characteristics to something, then you miss what they actually are.

Unfortunately, we humans are often not content with simple anthropomorphism; our perceptions of these beings must also match our very human politics too. We see this bias the clearest in the consideration of spirit and otherworldly hierarchies. 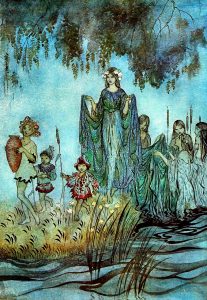 “Whether or not there are two set courts of Fairy, one thing that is clear is that the social structure does seem to operate as a hierarchy ruled ultimately by kings and queens. When we look at the bulk of the folklore it is usually a Fairy Queen who holds power, often with an unnamed King at her side or else ruling alone. In only a few Irish examples do we see solitary Fairy Kings. In the later folklore and ballads the Fairy Queens and Kings are often unnamed, going simply by their titles, but in older mythology and some local folklore we do have examples of named Fairy Queens and Kings, often beings who we know were once Gods.”
Morgan Daimler, ‘Fairies’, p61

“The Kinds of Spirits.
In regard to spirits, there are the superior and the inferior. Names of the superiors are: Lucifer, Beelzebuth, Astaroth. The inferiors of Lucifer are in Europe and Asia, and obey him. Beelzebuth lives in Africa, and Astaroth inhabits America.

Of these, each of them has two who order their subjects all that which the Emperor has
resolved to do in all the world, and vice-versa.”

Hierarchies are a feature among both the spirits of the grimoires and traditional fairy lore. As we see from the examples above, the Fairies have their courts and royalty, and superior spirits reign above the legions of inferior spirits of the Grimoirium Verum (and others).

However, an adherence to hierarchical social structure is not the only common trait shared by both Fairies and grimoire spirits. There is also the matter of power, and where that being lies on the scale of power in relation to its position within the hierarchy; these are dominance hierarchies after all. For example, in the above quote Morgan ties the older Fairy royalty with previous godhood. This is also a factor with the superior grimoire spirits cited above. Beelzebuth, as Jake Stratton-Kent reveals, is none other than one of the Ba’als of the ancient near East, and Asteroth none other than the goddess Astarte/Ishtar/Inanna (depending on time period and culture) (Stratton Kent “The True Grimoire” Pp. 136, 185-189 ). 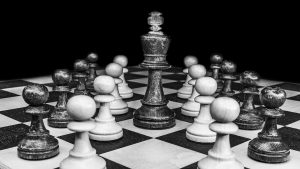 because they are the most powerful. Power is a universal passport to authority other others, and it doesn’t matter if a spirit or fairy belongs to a particular court or hierarchy, inherent power is always recognized. Especially by those who appreciate the ability to size up and not antagonize those who are stronger as an excellent means of ensuring continued existence.

It can be hard for a modern person to get their head around the concept of these kinds of hierarchies, and I believe this to be especially the case with modern Pagans (who tend to lean more towards the liberal end of the political spectrum). A lot of us tend towards ideas of equality, and some of us may even find the very concept of hierarchy distasteful. However, we cannot just simply decide that we somehow know better despite the literally thousands of years of precedent in multiple cultures. Because like the lobsters (who also interestingly form dominance hierarchies), those spirits are going to do what they’re gonna do despite our silly human feelings.

While we’re talking about those silly human feelings, we may as well address another key issue here: anthropocentrism. As a culture, we have a horrible tendency to center human feelings and human experience in all interactions with the Other, and it’s laughable. We act as though everything non-human out there is there for us in some way, when that is simply not the case. This is a large part of what it means to have agency. A being with agency doesn’t exist for others, they are not the means to another’s ends, but ends unto themselves.
Moreover, I can all but guarantee that they don’t see us as the special snowflakes some of us seem to think we are, and if any of them seem to, it’s generally best to assume they probably believe you to be delicious in the culinary sense. (Oh yes, some of them are known to eat people.)

Like I said earlier, “Lobsters are just gonna lobster”.

Birds of a Feather

Lastly, you know how humans tend to all stick together in alien encounter movies? It seems like a natural response to something so different from ourselves, right? And that’s not even taking into account the many ways in which we privilege our own species over others on this earth. Again and again, we put the needs of humans over those of the flora and fauna of this place, and we generally see nothing wrong with it.

Now think about that, and ask yourself why any spirits or race of otherworldly beings should feel any differently? Perhaps it is also anthropomorphism to ascribe this human trait also to fairies? However, that is not what we see in the centuries of fairy lore involving interactions between Fairies and mortals. If anything, the implication that there is a loyalty between Fairies that is not extended to humans (Daimler “Fairies” Pp 34-38).

Avoiding the Perils of Perception

Hopefully if there’s anything this post has made clear, it’s the importance of questioning our perceptions of the Other. Because not doing so, can lead to some very dangerous (if not deadly) situations depending on who you’re dealing with.

However, there is also a greater lesson here that can be applied to our human-to-human interactions in everyday life. You see, much of the way in which many of us consider the Otherworldly, is a reflection of how we consider other humans who are different from us (albeit on a different level). And I don’t believe it to be any coincidence that we mostly belong to cultures that were and/or are still colonialist powers. The cultural backgrounds within which most of us originate, are steeped in taking from and commodifying the “other” among our fellow humans. This is an important point to recognize and think upon, especially if you find it hard to get away from this mindset. Because if you still carry that baggage, you are not fully considering the “Other” (be it humans who are “other” to your cultural or racial group, or otherworldly beings/spirits) as persons with agency and worthy of genuine respect.

And of course, it has to be said that there is something very fitting about a discussion on the agency of the Fair Folk – who are known for their glamours – pulling the sins of humans towards each other into sharp focus. Sometimes the greatest horror is in the revealing.

In the next post, I’m going to look at the importance of authority when dealing with spirits and the otherworldly. This is quite a large topic, and so it will be sub-divided to save you from slogging through a 3000 – 5000 word post (including an excerpt from my upcoming book). Then finally, I’m going to look at how matters of authority and hierarchy play into the process of acquiring a familiar. So watch this space, and in the meantime repeat after me:

“I am not king shit.”
“Favors may be gained through relationship or reciprocity.”
“Others have agency too.”

For more in-depth coverage of fairy hierarchies and royalty, check out Morgan Daimler’s book ‘Fairies: A Guide to the Celtic Fairy Folk’.
For more information about the True Grimoire (which contains detailed discussion of hierarchy), check out Jake Stratton-Kent’s ‘The True Grimoire’. If grimoires and goetia in particular are your thang, be sure to check out the rest of the works in his Encyclopedia Goetica (available from the same link).