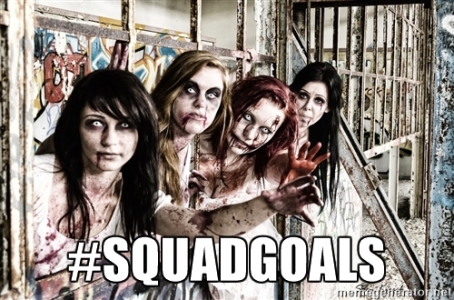 Bored with the same old candle spells and rhyming couplets? Why not dabble in a spot of necromancy for the kind of life change that only the dead can bring! Practiced for generations and common to pretty much every culture on earth, necromancy is the new way to find out shit you wouldn’t otherwise know.

We all have things we want to know about: lost items we want to find, things we want to know about other people, what the winning lottery numbers are…. and well, as we all know Siri can be a right royal bitch! But who the fuck is she to be a bitch? Sure, the dead can be bitches too (see point #2 ), but they arguably have some sentience (depending on your worldview). It’s like the difference between getting attitude from a fucking Furby, and you know, an actual person. Yes, Siri, you’re just some flashy Furby pimped up with spy tech! You are NOT the boss of me.

(FYI, the Dead also beat Alexa. The gods don’t go to any old schmucks for information!)

But the point is, the dead can help with lots of questions. From modern iterations on the traditional treasure-hunting theme (“Where are my keys?”), to questions designed to find out hidden knowledge (“How many people has my aunt ____ banged? How many does it take before people start to call you a ‘bike’?”), the dead have you covered.

For the truly self-centered and destructive among you, necromancy also gives you the option of compelling the dead

to go and fuck up someone you hate! Yes, for the small cost of completely shitting on any chances of being a decent human being and the potential consequences of getting caught robbing graves, you too can have your own dead army. Marvelous!

Of course, there’s a lot of argument about whether it’s *really* bad to do that to the bones of traditional targets (like hanged criminals and shit), but I’m going with the moral absolutism here. It’s way easier to be sarcastic about absolutes than shades of grey.

The Underworld’s The Limit!

So, what key tips would I give to the would-be necromancer? I’m glad you asked that, because I have some right here!

1. Pick The Easy Ones

This is something of a no-brainer, but you generally want to go for either the somewhat debilitated or you know, people who actually liked you in life. The reason for this is that if you have a Code:Draugr situation, the weaker ones won’t be able to fight you as well, and people who liked you won’t automatically try to fuck you up when you drag them kicking and screaming from their miserable afterlife existences. Don’t go for the cool-sounding warrior or king, because that hardly ever goes well. The same goes for criminals or people who have died in really bad ways. That kind of anger sticks around (also: see point #2)

Generally the best advice is to go for your grandma who used to feed you cakes every time you went round to her house. Only this time, she’ll be feeding you information instead of diabetes.

2. An Asshole In Life Is Still An Asshole In Death
So, once upon a time there was a douchebag called ‘Hrapp’ who lived in Iceland way back when. Now everyone thought he was a grade A prick even in life, so it should have been a no-brainer to not bury him IN A FUCKING DOORWAY! Except they did, and it was terrible, because doorways are weird, liminal places, and Hrappy-boy stayed right where he was. Yes, they had a Code:Draugr situation, and it sucked. Because if they thought he was a prick in life, he didn’t exactly improve on death. No, he got worse, and even worse, he had draugr-powers.

To be fair, his wife probably just dealt with his demand to be buried in the doorway with the same level of give a shit or existential terror as she may have done to his demands for horse ass for dinner. Whatever, the moral of this story is clear: death doesn’t erase douchebaggery, so don’t raise douches. (That’s a moral for more than just necromancy, right there!)

3. Be Respectful
So, you’ve got your dead all nice and necromanced, how do you talk to them?
Well, if your answer was something along the lines of “Well, like Zak Bagans!”, do the world a favor and slap yourself. Actually, slap the shit out of yourself and put down the necromancy, no more necromancies for you!

No, the best way to deal with the dead in necromancy is to reign in all your inherent douchebaggery and pretend you’re a respectful fuck who isn’t just really trying to find out who his/her aunt banged for the lolz.

4. It’s OK To Be Scared
In fact, if you’re not scared, you probably have no internal capacity for risk assessment. If you cannot do that, then put down the necromancy. Fear isn’t a bad thing, it’s natural when raising the restless or rested. If anything, that preternatural cold kind of inspires it. It’s like a visceral warning that what you’re doing is not just a little bit against the natural order of things, and that’s the kind of instinct that keeps you from either joining them, or winding up in a straitjacket.

You just have to learn to handle the fear, not rid yourself of it.

5. Fuck-Ups Happen, So Have Backup Plans
Another thing you have to handle is the potential for fuck-ups. Or even ways in which you vastly underestimated the situation (same diff). This is incredibly common, and despite the new and improved character sheets the dead now come with which allow you to compare their stats with your own to see who has the most dots in whatever, fuck-ups are pretty much a part of the necromancer’s life.

Once upon a time, there was this dude called Benvenuto Cellini. Now Cellini got in with a necromancer back in the day and kinda let him know that he was up for learning about it. Kind of like a bucket list kind of deal really. So Cellini, his new necromancer buddy, and a couple of other mates he invited along, went off to the Coliseum to go and bother the dead. The first time they went, it was all a bit “oooh” and “ahhhh”, and “when will I see my dead girlfriend again?” (FYI, not a good question to ask.)

The second time though, there were more spirits than you could shake a stick at of various kinds. I mean, this was a situation seriously going downhill. But did the necromancer turn into Zak Bagans? Nope, he stayed respectful. His assistants were terrified, Cellini was terrified, the little virgin boy psychic they’d brought along was terrified. Seriously, they were so close to being completely up shit creek because the Coliseum was crawling with the dead and everything else.

Thankfully, the necromancer had a good plan to disperse the dead, and this is where we get into back-up plans.

6.Fart-o-cism
Yes, you read that right.

Cellini’s necromancer had a big pile of stinky ole asafetida. Because the dead apparently don’t like stinky stuff. (Nor

do the elves btw, a euphemism in Icelandic for ‘to take a shit’ allegedly literally translates as ‘drive out elves’).

However, they didn’t really need to crack out that fetid weed, because….

Cellini’s bud Agnolo cut cheese like you wouldn’t believe. No really, from the description it sounds like that fart would have left a mark. But it worked, and the dead started to get the hell out as soon as they could.
So you know, if you’re really in trouble, try shitting yourself.

7. Put Them Back When You’re Done
Remember when you were a kid and you finished playing with some toys, left them out, and got bollocked by your mum for not tidying up after yourself? Well it’s the same principle here. If there’s one theme that keeps coming up again and again in the different accounts of necromancy, it’s that the dead mostly don’t like being raised, so the least you can do after finding out where your car keys are, is put them back. Necromancy that focuses on just calling them up is half a job done. Don’t be one of those guys.

8. Purification, motherfuckers!
Lastly, when you’re done with your necromancing for the day, don’t forego your purification rites in favor of climbing into bed and getting a few more minutes of sleep. You already messed up your night’s sleep with going out and fannying about at the local cemetery/burial mound/crossroads, you may as well just suck it up and make sure you end the night right.

The dead are kept from the living for reasons, mostly that they’re not too good for us. So, it’s a good idea to make sure that you leave the fun of the graveyard, in the graveyard. Popular options include a good old-fashioned scourging, suffumigation, and ritual bathing, so there’s bound to be a method to suit every necromancer!

If all of this sounds good to you, and you’re the kind of person who enjoys the kind of pant-staining terrifying fun with the dead that only necromancy can bring, why not actually give necromancy a go?

Necromancy: Because Siri Is Shit