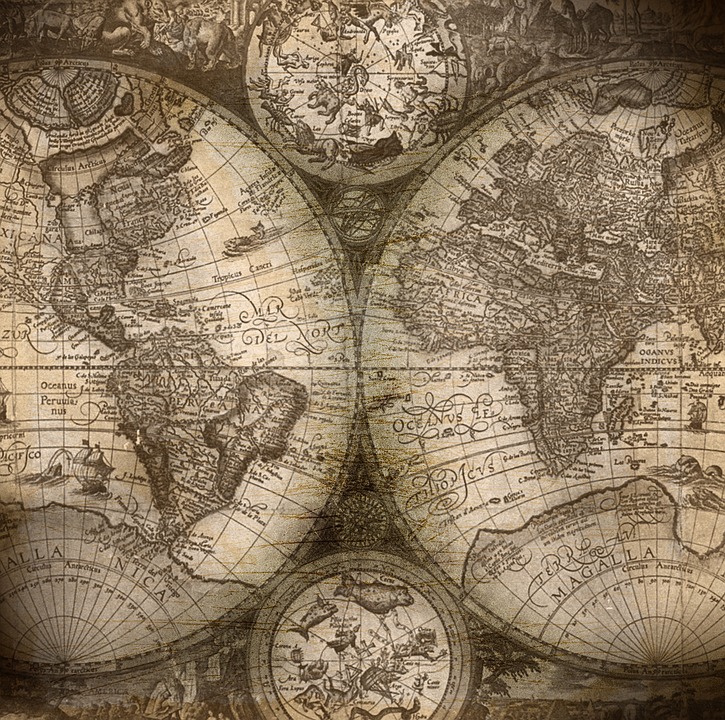 Brother Petrus’s office was small -cramped almost – a cell-like space with books stacked against every conceivable support. It had been a cell when he’d first taken the space over for the task that his superiors at the Holy See had assigned to him, but he’d arrived – a stranger to this small and seemingly insignificant port town church, and he’d done as he was bid.

Not since the days of the Inquisition had his superiors been so concerned about the affairs of the common folk. People still spoke heretical charms over butter to stop the elves from souring, and practiced foul heathenisms at wells and trees, and yet the Holy Mother Church had done nothing. In some places they’d even encouraged it, perhaps in the spirit of Pope Gregory of old, the pope who’d encouraged the church to allow the people their…indulgences, and instead of destroying, simply redirecting them to the worship of the risen Christ.

But this, this was different, and where they had only previously spoken of the foolish ways of the country folk and ‘little P Paganism’, they’d instead put people into place and plans in motion. He was one of those people, those tiny cogs in the greater machine of the Vatican stratagem against whatever it was they were worried about. He didn’t know the whole story, of course, and nor would he question. Brother Petrus knew his place and the virtue of keeping to one’s place, but still sometimes, maybe when trying to ignore the barely suppressed wrath of one of his subordinates as they carried out yet another seemingly senseless edict, he couldn’t help but get a little curious.

The one good thing about his ‘office’ was the window. It was barred, like all the others – an echo of a time when religious buildings were as much prison as sanctuary depending on who you were. But the view was unspoiled by the skillfully wrought iron that covered the orifice so ornately. Outside was a flurry of activity as the assorted cast of sailors, passengers, and merchants played their parts in the production that was yet another day at the dock. He sipped his tea, savoring the warmth as it worked its way down his too-rough throat. Too much shouting, too many orders for people who didn’t understand and who no longer seemed to see obedience as a virtue.

There was a knock at the door.

Turning from the temporary escape of the window, Brother Petrus set the tea down on his desk and wearily took his seat.

The heavy wooden door swung open pendulously to reveal one of the younger Brothers and a middle aged woman.

The younger monk bowed deferentially as he spoke, but his voice barely hid his disdain, “Madame Blavatsky, Brother Petrus…as you requested.”

For a moment, he considered abrading the other monk in front of their guest, introducing consequences for such behavior. He knew how they all spoke of him as soon as his back was turned, maybe it was time to remind them of their vows? Locking eyes with the other man, he let his anger bleed into his eyes and watched as it registered on the other monk’s face. “You are dismissed, Brother Erasmus,” he all but growled.
The woman – a Madame Blavatsky that his superiors had wished him to seek out watched the display with no small amount of amusement on her face. Brother Petrus bit back his anger, shifting his demeanor to that of congenial host.

“Madame Blavatsky, please,” he said in perfect English as he gestured in invitation at a seat on the opposite side of his desk.

“Thank you,” she replied and took her seat. Once settled, he watched her look around the room, taking in the various books and map.

“You seem to be a man of learning.”, she began. “But I do not suppose I was invited here to discuss books with you.”

“Indeed,” he allowed, smiling slightly at her cynicism as he unfolded and spread out a yellowed map on his desk. Spidery ink trails of Latin crawled across almost the whole of Europe, but it was the two large triangles that connected six different cities that really drew the eye. Madame Blavatsky’s eyes widened.

“I take it you know what this is, Madame Blavatsky?”, he hazarded. Maybe it was simply the age of the map that had surprised her?

“Yes”, she breathed, her voice barely more than a whisper. “I’d heard rumors of this, of these triangles, but I had never seen any credible proof of such a thing until today.”

Taking a deep breath, he began to read.

“Dear Madame Blavatsky,
It is with the deepest gratitude that we thank you for agreeing to come and meet with Brother Petrus. We are very much aware of the strangeness of our request, please rest assured that had we greater latitude in this matter, we would not have done things thus.

Please also forgive our use of Brother Petrus in this manner. While it would be easier for you to simply read the letter, we have come to realize that that is not always safe for us or for you. Brother Petrus is uniquely single-minded in whichever task he is given; it is a trait that serves us well.

You are probably wondering why we requested this meeting and why you are looking at the priceless map that accompanied this letter.

It is simple, we understand that it is your intention to travel to London and to settle there for at least some time. We would ask that you stay in Oostende for not only your sake, but the sake of many many lives. It is hard to explain this request while also adhering to the necessary amount of circumspection, but we shall try.

You have already probably noticed the two triangles on the map: The first triangle connects Turin, Lyon, and Prague, and is known as ‘The Triangle of White Magic’. The second triangle, which connects Turin, St Francisco, and London, is known as ‘The Triangle of Black Magic’. As unbelievable as it may be, dear Madame Blavatsky, this in of itself is not a matter for concern, and were things left unchanged and how they are, this meeting would not be taking place. However, something has changed in London, something that our agents report can only be described as the feeling that there is something dark and magical emanating from some occulted subterranean cove. Our prophets tell us that this will herald the end of the world as we know it, and already we see the fruits of this poison in the popularity of Hermeticism in the city.

It is for this reason that we are asking you to stay in Oostende, lest you further inflame the situation. In exchange for your compliance, we are prepared to negotiate a sizeable compensation with you. You need only inform Brother Petrus of your answer in terms of ‘Yes’, or ‘No’. All documents pertaining to this communication will be burned and our good Brother Petrus will keep his silence. Brother Petrus silentium ad infinitum.

May you choose wisely.

The letter did not remain in his hands for long, scant seconds passed before he was almost automatically clearing the map from the table and carrying it to the fire kept burning in the grate. Madame Blavatsky simply sat there, a look of shock on her face, though he could not think why. He had no memory of what he’d just read even though it was less than a minute from his lips, and the logic of tossing everything that had arrived by messenger not one day ago into the flames eluded him. The urge to watch carefully until the fire had consumed the documents wholly was also difficult to explain to himself, and yet he did it as though he was incapable to do otherwise.

For a moment, he sort of remembered doing this before, and feeling the same way then as he did now. From this perspective, his life seemed like a confusing mess of drudgery intermingled with blank spots and the briefest moments of clarity. Something told him that an hour from now his memories would fall from his mind as surely as the snow fell in December.

Turning from the grate and the ashes of secrets, he regarded the woman. She seemed afraid, why was that?

“And what if I say no?”, she asked carefully, edgily, her voice barely betraying only the slightest hint of a shake.

Brother Petrus didn’t understand, what would she say no to?

“I’m sorry Madame Blavatsky, but I don’t understand, may I get you some tea?”, he offered.

Her head snapped round to look at him dead on and for a moment he felt as though his heart were a box to be opened and that she had somehow found the key. A look of indescribable pity chased fear across her face before settling and becoming the dominant emotion. The air in the room thickened – that was the problem with these little cells though, they only ever had the one, small window. He shifted uncomfortably as Madame Blavatsky stood, moving towards him and taking his hands in her own. Ozone tinged the air as he felt small, barely-there traces of sensation against his skin, almost as though she was drawing something on the top of his hands with her fingers, but he didn’t look. Her piercing eyes met his and held them there, fixing his gaze on her own. He barely noticed the slight movement of her lips or heard the impossibly quiet whisper of words. Instead he felt something he hadn’t felt for a long time – not since Bishop Gervasio had taken him to that strange round chamber in the deepest parts of the Vatican where so few get to tread: He felt free.

Madame Blavatsky’s words took form and shape and remade themselves in his mind as comprehensible words, words that he could once more understand. A phrase, repeated over and over again, a phrase that felt imperative that he also repeat.

His voice joined her own, the tickle on his hands became a buzz, and suddenly *everything* shifted. For a moment, they were no longer in his small office cell, with its even smaller window promise of freedom, except that they were, but not. It was different in ways that Petrus knew he’d never manage to explain even if he were given twenty years to do so. It was all so much more…real, as though he was seeing the world properly for the first time. They both stopped chanting simultaneously, and Madame Blavatsky smiled.

“There will be no snow fall this December,” she said enigmatically, and Petrus knew that to be true, nodding his agreement.

Taking her hands back, Madame Blavatsky brushed herself down, businesslike, as though she hadn’t really just broken whatever magic had been holding him prisoner and tipped his world on its head. Looking around his cell he smiled, there was no way he was ever going to miss this place.

She was already at the door, pausing before the heavy wood with its old iron bands before she turned back.

“It looks like things have…”, she cocked her head to the side, as though trying to shake the right word loose, “changed.”

He nodded his assent, shocked by how much easier such a simple movement seemed now. She studied him for a moment before continuing, “You have much to learn, Petrus. I will teach you – in exchange for work – if you desire it.”

Brother Petrus swallowed, “What will I need to bring?”

He was going to London.