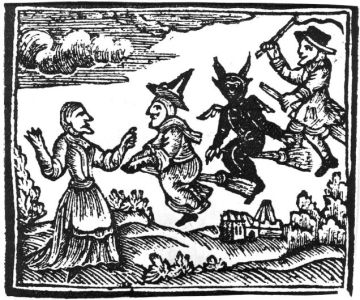 A Demon and a Palm Tree

There’s been a curious post going around on social media this morning. It’s a photograph that was purportedly taken in Arizona of what appears to be a demon dallying in a street. Over and over again, I’ve seen people assert that it’s a 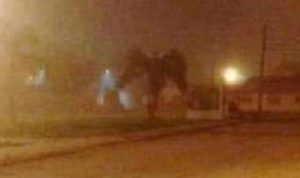 palm tree, despite the fact that it’s clearly not. Let’s face it, it looks nothing like a palm tree. Now I’m not saying it is a demon (we do live in the era of Photoshop), but what is curious is the vehemence that people are defending the palm tree explanation. This reminded me of something I heard while in a trance once. In the trance I was walking down the street, but it wasn’t just populated by the living and seen, but by everything from ghosts, to faeries, to creatures of a more mythological nature. Weaving in and around the living and seen, they went completely unnoticed, and I was baffled. How could these people just go about their shopping and *not* notice that dragon? Then came the voice. It was not a ‘head voice’ but external, coming with all the force of an air canon.

“They won’t see because they don’t want to see.”

That sounds like the kind of bullshit thing a shill sells to people in order to blur the lines of their reality and make them more invested in what the shill has to sell; but there is a truth to it.

Because that is how a whole bunch of people can look at a photo of a demon dallying down some Arizona street and argue vociferously that it’s a palm tree. They simply don’t want to see. Even in the age of Photoshop when you can create a demon and add it to a photo to freak people out on the internet, people will still argue for the tree. The bubble is being threatened, and any suggestion that things are not as they seem must be destroyed in the most mundane way possible.

The lines must be redrawn between the possible and impossible and the world reasserted, people must feel safe.

Because if we do live in a world in which there might be a demon that saunters down some street in the South West, then that means that there are a whole load of possibilities and dangers that people don’t know how to counter, and nobody likes that. Who among us doesn’t like feeling like we’re the one in charge?

In the same vein, it would seem that my post ‘Witchcraft is Not Safe (and Nor Should it Be!)’ has resurfaced after almost a year of floating in the depths of the web after the initial furor. Now, as then, I’m facing a whole bunch of criticism for having the audacity to actually go to a burial mound and call up the dead.

However, in an almost-year of reading and countering criticisms about something I did back in 2005/2006 by people who obviously know far better than I did in my twenties, I’ve learned a thing or two about that criticism.

First of all, this criticism is neatly avoiding the point of the post, but also proving it in some ways. It seems to come from certain groups more than others, but all essentially boils down to the same thing: if you place the blame on the practitioner, nothing is changed. Witchcraft remains that benign, misunderstood thing that is sold as part of the shitshow that is modern identity politics, and there’s nothing that could *really* harm you – except maybe breaking that ‘rule of three’ (and don’t get me started on that one).

Often it starts out with a ‘this wouldn’t have happened had you (not) done _______’. But the curious thing I’ve noticed about participating in these discussions and countering that criticism (because I do really want people to get what I was saying), is that when you counter with how you did do that, then you end up with a litany of similar pronouncements. The more you counter and detail the measures you took, the more the goalposts widen, and in the end it feels as though you’ve gone well into the territory of clutching at straws.

People in Pagan magical communities, especially those who are considered authorities (or would like to be), hold up things going off without a hitch as being some kind of gold standard of their skill. But I don’t think that’s anything anyone should be proud of – no sword was ever considered strong or even usable without being tempered first. If anything, this adherence to making out like your magical shit doesn’t stink is contributing to the moribund state of magic in modern Paganism. Moreover, if you are actually out there, pushing boundaries, working at leveling up, and you don’t have at least some stories of when things went tits up. Well, you’re either lying your arse off because you don’t want to look unskilled, you’re not as experienced as you claim, nothing is happening for you, or you’re staying where it’s safe.

There’s a point to be made about this idea of safety too. We humans like to be safe. Ever since the beginning of humanity we’ve been running risk assessments and mitigating the dangers in our lives. For the most part, we’ve got the physical side of things down. Science tells us how things work, we have some measure of predictability, and we generally sleep at night without worrying about things like changelings, revenants, and goodness knows what else.

So when something comes along that challenges that sense of safety and predictability in a visceral (as opposed to the more typically cerebral) way, we fight back. We lash out at it in the hopes that it will go away. We try to find ways to explain the scientifically unexplainable in ways that are more acceptable to our worldviews. We scream that the denizen of hell in fuck knows where AZ is a palm tree.

We try to convince ourselves once again that we are safe and that anything vaguely threatening can be put down to some fucking amateur on the internet. In other words, we convince ourselves that nothing like that could ever happen to us. That kind of thing only ever happens to other people, and probably because they didn’t follow (insert piece of worldview that further reinforces a sense of safety here).

Witchcraft is not safe (and nor should it be!), because if it is, then we’re not pushing things forward. An element of risk is a part of this game, and if you look at that risk and ask yourself why anyone would do that, then maybe it’s not the game for you.

Witchcraft is not safe (and nor should it be!), because the unseen doesn’t come with D&D-style stat sheets that we can compare with our own and make the decision to keep away. They do come with a fuckton of agency though, you know, as you might expect for independent beings that aren’t just figments of the imagination. And sometimes, you don’t get to the ‘goodies’ until you’re a few hours into ritual.

Witchcraft is not safe (and nor should it be!), because now more than ever, we need to see the world for what it is and deal with it on that basis. We need to break down our mental barriers, hate fuck the Demon Palm Tree Bubble out of existence, and reclaim what we actually lost. People talk a lot about re-enchanting the world, but to me, that sounds like a goal-idea set further down the road that people can get behind as being interesting but without actually really changing anything in the now. It remains safe because it’s not so much in the now, and we are apparently the ones to be doing the re-enchanting. Well, have you ever considered that maybe the world never stopped being enchanted but we just learned to not see it anymore (lashing out whenever we’re given a hint of it)?

Witchcraft is not safe, for a whole host of reasons, but it should never be unsafe because the people you’re working with don’t appreciate the agency of what they’re working with, have an unrealistic view of what could potentially happen, or a lack of ability to roll with it when shit goes down. Because if we’re to break down that Demon Palm Tree Bubble and live in this ‘reenchanted’ world, it is far better to be the tempered blade than the good-looking, shiny one that was never tested.